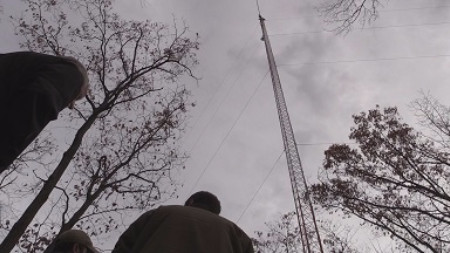 RHINELANDER - A walk down a gravel driveway and up a leaf-covered path in the Town of Crescent led Lon Roberts to one of Oneida County's prized projects.

"People who are trying to get into the process should look at what Oneida County has done," Roberts said.

Roberts is the new state Public Service Commission commissioner, which is the agency that regulates utilities across Wisconsin and doles out grant funding for broadband projects. Monday morning, Roberts got to see one of more than a dozen broadband internet towers Northwoods Connect and the county put up in the last two years.


"This is really very important work that we all in government need to continue to support and wherever we can, make it successful," Roberts said.

The county has provided high-speed internet to about 50 percent of the county at this point. Through Paul Osterman's Northwoods Connect, the county decided to pursue fixed-wireless technology over burying fiber optic cable -- a process that costs about $100,000 per mile to bury line.

It's a successful model that Paul Osterman never imagined to happen so quickly.

"I wouldn't say pressure, I would say excitement," Osterman said of hosting Roberts on Monday.

Osterman's Northwoods Connect can reach underserved areas where broadband was unreliable or non-existent, with a goal to cover as much of the county as possible. So far, about 60 homes in Crescent are Northwoods Connect customers, just one week after service started being installed.

"The return on investment to come out to areas like this, it's very thin," Osterman said. "That's why the big corporations [like Frontier, Verizon, and AT&T] aren't doing it, so with the help from the state and the local private entities, and local public entities, we're able to do that now."

Northwoods Connect and the Oneida County Broadband Development Committee rely heavily on grants from the PSC to build a network. So far, three state grants offered about $275,000 to build towers. That money has been matched -- and then some -- by the county, local governments, and private donations.

"I think it's pretty well proven these days that we wouldn't have broadband in rural Oneida County unless we had the help from the state," committee chairman Dave Noel said.

Another $375,000 has come from local governments, school districts, and even health care providers. But the committee needs more money to cover all of Oneida County.

The county received just half of the $90,000 it requested for 2018 projects from the PSC. That was part of $1.5 million in statewide grants.

With $7.5 million on the table for the next round of PSC grants, Oneida County knows it faces a competitive process to win more funding.

"[Oneida County is] going to be competitive because of their experience and their prior success, but there is a lot of demand for these grant dollars," Roberts said.

"They've gotta spread the dollars around and it's a limited amount of money and we all understand that," Noel said. "We'd just like to get finished and move on."

Northwoods Connect hopes to build another 14 towers in the next two years, mainly in Oneida County. Chairman Noel expects there to be about $15 million in grant requests for the $7.5 million available.